The other day some people took a fun little bike ride in our part of the world.

There were 522 registered riders in the fourth annual Ride the Hurricane. This event — a fun ride rather than a race — is organized by our local Chamber of Commerce with the involvement of the staff at Olympic National Park. For six hours on a Sunday morning, the road from downtown Port Angeles into the Park and up to Hurricane Ridge is closed to automobiles, transformed into a superhighway for bicycles.

This was CFL’s third time in this event. He usually rides up to the Ridge solo at least one other time during the summer, but this was his first trip up this year. The ride is 36 miles roundtrip, with an elevation gain of nearly 5,000 feet on the way up and the equivalent (very rapid) elevation loss on the way down.

New for this year was a spectator shuttle, which turned the event from a personal cycling challenge into an adventure that loved ones could share. I watched CFL start out on his ride, then I got on the shuttle. We drove very carefully up the Hurricane Ridge road, mostly in the left lane, passing hundreds of panting cyclists. That is a steep road! I waved at CFL as we passed him at about mile 6.

At the top, most people positioned themselves at the finish line so they could cheer for each arriving cyclist. However, I knew that CFL would take about four hours to reach the top — which gave me nearly two hours for hiking!

CFL and I have been so busy with many other things that we haven’t had many opportunities for high country hiking. Some of the best wildflowers are already gone. However, I was hopeful as I set out along the Klahhane Ridge Trail.

It didn’t take me long to realize that I had given myself an extraordinary opportunity. Because the road up to the Ridge was closed that morning, there was almost no one on the mountain. The trail runs along the ridge high above the road, which gave me occasional birds-eye glimpses of cyclists far below. Now and then I’d hear a shout from the road, but most of the time all I heard was birds and bugs.

I was on that trail all by myself. This struck me as slightly weird and a bit disconcerting at first. But as I continued to walk I lost myself in the wildflowers and mountain views, and I relaxed. 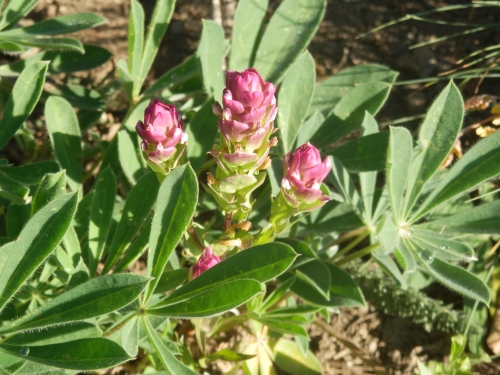 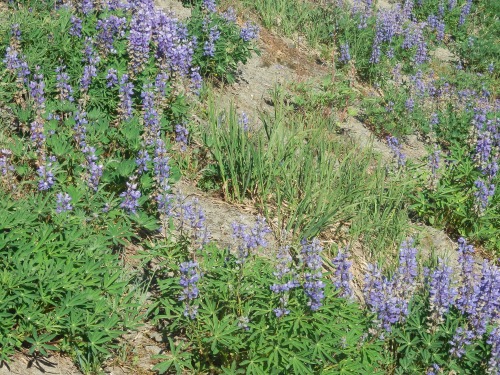 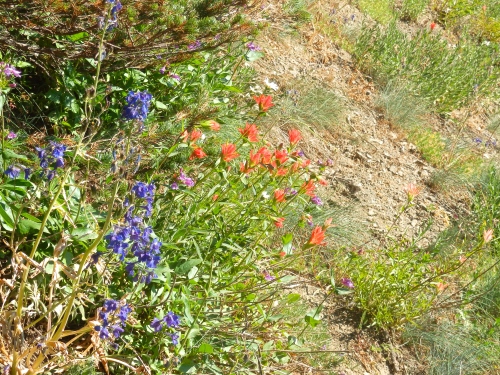 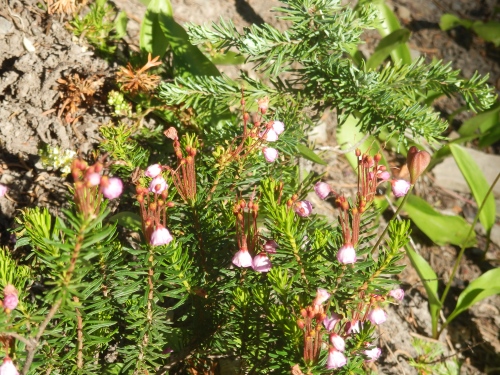 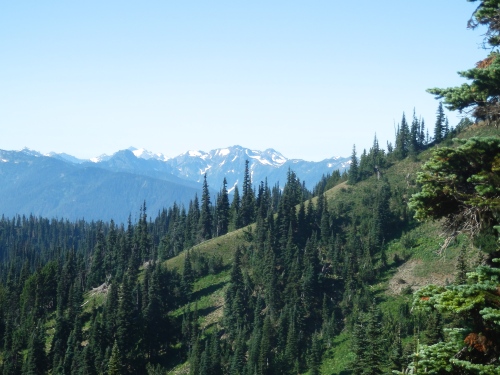 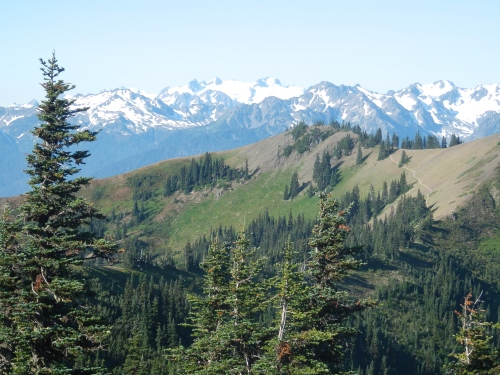 I hiked out for just over two miles, then somewhat reluctantly started back. The return trip provided the best angles for viewing the cyclists on the road. These photos were taken with a zoom lens. 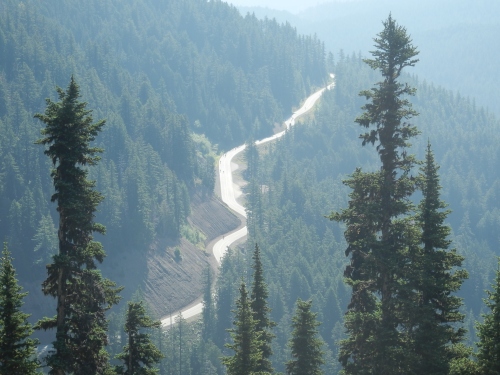 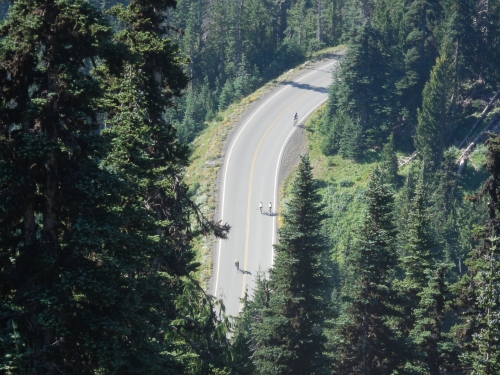 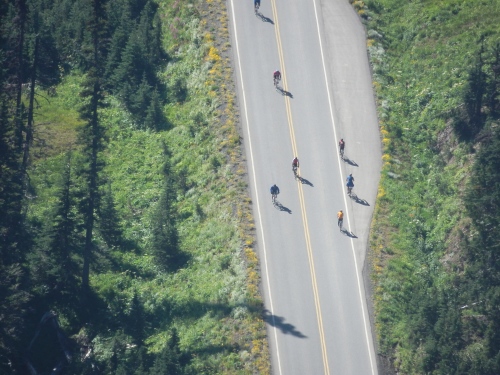 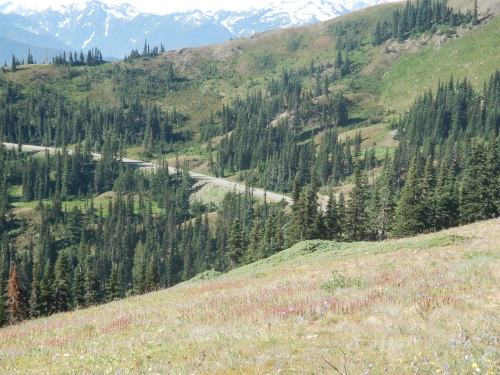 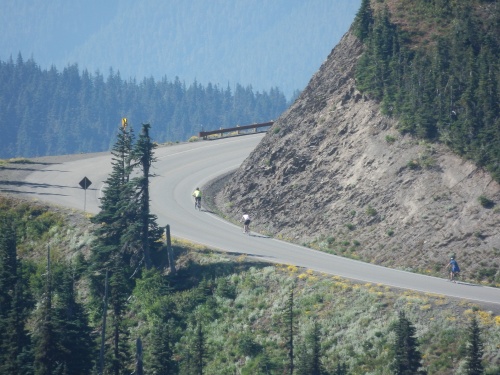 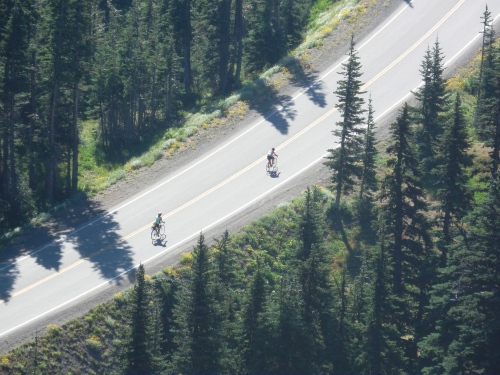 During the last half mile of my hike I was looking down at the parking lot where the cyclists were arriving.

I hurried back from that point to make sure I wouldn’t miss CFL’s arrival! Sure enough, I’d only been at the finish line for about ten minutes when he pedaled around the final curve. 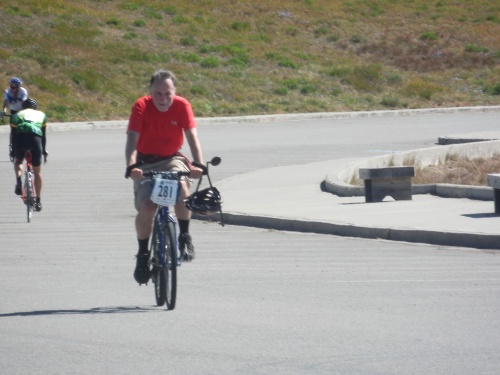 He was a little tired (understandably!) but recovered quickly and was his usual smiling self moments later for his official portrait. 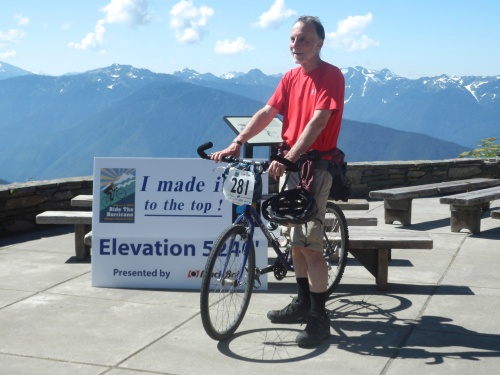 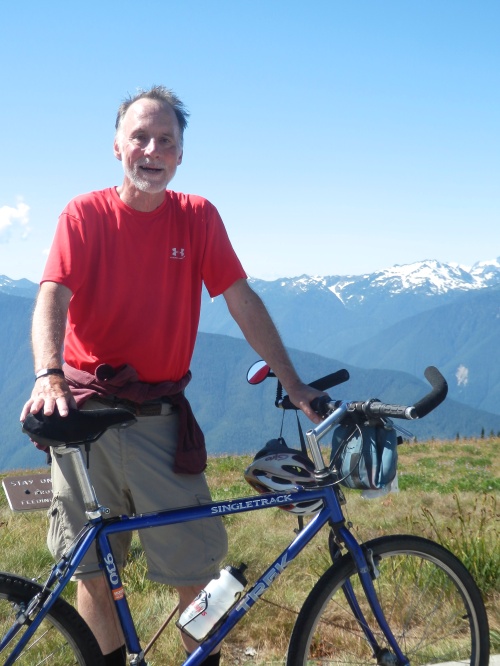 It was simply a wonderful day for both of us! An awesome bike ride, a perfect hike, and many hours soaking up the midsummer sun.

Then we relaxed and had a couple of home brews!

6 responses to “Ride the Hurricane!”