A week of beer tourism (part 1)

When I last left off the tale, we were leaving Monterey after a week’s worth of car-club activities. We could have taken two days to drive home, but we opted instead for a slow, steady week’s worth of short drives, long walks, and serious beer tourism.

Central and northern California are home to some world-class craft breweries, and we made it our mission to visit as many of them as possible.

When we visit a brewery, we usually share a flight. This gives each of us about a 2-ounce taste of several beers. That way we get to sample lots of beers without actually drinking all that much. Then we always follow a tasting with a walk. In an hour or so we can tour a downtown and see it in a way that most tourists don’t, while adding up our daily mileage as well.

We’d actually incorporated beer tourism throughout our trip, beginning with a tour of the Firestone Walker brewery in Paso Robles. They did a nice tour, almost 40 minutes worth of walking around the brewery before returning to the taproom for tastes. The guide was both knowledgeable and passionate; he enjoyed our nerdy nit-picky home brewer questions about the details of their brewing process. I bought a bottle of Parabola, a barrel-aged imperial stout, to take home.

In Santa Cruz we visited Seabright Brewery. We enjoyed the beachy vibe on their pink and turquoise patio. Their beers were all good but there were no standouts.

During our week in Monterey we made a few visits to Peter B’s brewpub in the Portola Hotel. Their Legend of Laguna IPA was quite nice. We also tasted several good beers from English Ales Brewery in nearby Marina, although we never made it to their taproom. We dashed into Alvarado Street Brewery just before closing time one night for a quick half pint of Duane’s World IPA.

Upon leaving Monterey we stayed a couple of nights with a niece of Chuck’s in the bay area. This allowed us to spend several hours in San Francisco walking to breweries. We couldn’t get into Anchor (their tours are booked six months in advance, and there is no other way to taste at the brewery), but we visited 21st Amendment (home of Brew Free! or Die IPA), Thirsty Bear, and Cellarmaker. The beers at Thirsty Bear were pretty good, but the food was awesome — it was an outstanding choice for our late lunch. Then at tiny Cellarmaker we encountered a beer called Coffee and Cigarettes. I don’t care for smoked beers, but this smoked porter was rather wonderful, and very aptly named.

The next day we began ever-so-slowly making our way northward. On a friend’s recommendation, we stopped in Fairfax to visit Iron Springs Brewery. Their Sless’ Stimulating Stout won a gold medal in the Oatmeal Stout category at the 2104 World Beer Cup. It was very nice, but my favorite was the Casey Jones Imperial IPA. We had to take an extra long walk after that one, but downtown Fairfax was absolutely charming.

From there  we drove just a few miles north to Petaluma, for Lagunitas Brewing. This is one of the big ones, with national distribution of their core beers. We sat in their shady patio enjoying laid-back live music and limited our tasting to small-batch beers that we can’t get at home. Night Time (a black IPA) and Fusion 22 (an IPA) were the standouts for me. It’s pretty clear that hops are an acquired taste, and we’ve turned into major hopheads. We love IPAs! Unfortunately Lagunitas is in the middle of an industrial park so we didn’t much enjoy our walk afterwards, but we soldiered on and got it done.

Then it was on to beer Mecca! We spent a night in Santa Rosa with a college friend of Chuck’s, which allowed us to visit a small local brewpub called Russian River Brewery. Their Pliny the Elder (a double IPA, natch!) has been voted the best beer in America by the members of the American Homebrewing Association for the last six years in a row. Their Pliny the Younger (a triple IPA), released each year in February, provokes 12-hour lines at the brewery and sells out in days. We’ve never tasted the Younger. We’d only had the Elder once before, in San Diego. Russian River’s distribution is extremely limited — it goes to select counties in California, a few places in Oregon and Colorado, and oddly to Philadelphia. For us, drinking Pliny at the source was a huge thrill that we believe every craft drinker must experience!

Russian River served up the largest flight I have ever seen. Despite their fame in the IPA realm, most of their beers are Belgian style (not our favorite) but it was Russian River so we had to sample everything. In this photo, however, you’ll notice that I’m hoisting a pint glass. I was taking microscopic sips of the Belgians but devoting most of my attention to that pint of Pliny. 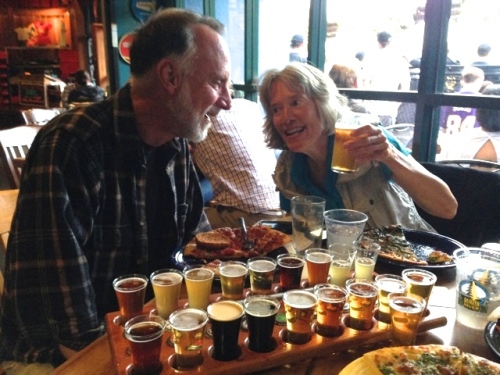 Russian River was the one stop on our brewery tour where we actually bought beer apparel. We also bought a treasured six-pack of Pliny to go. A few of the bottles actually made it all the way home with us.

Gosh, I’ve only got partway through the week and I’m pushing 900 words already. I have more wonderful breweries to tell you about, but after Russian River I need to exhale!

Why am I still inside on this perfect summer day, anyway? I think I’ll stop writing for today and go for a bike ride.